The History of Ojibwa Elementary School

Long ago, Dittrich School was a one-room schoolhouse originally on the site of 21 Mile Road and Heydenreich Road where Ojibwa School now stands. This photo was taken around 1908. Micki Schichtel, Ojibwa's former Librarian, talked to a friend who actually attended this school in the late 1950's. She said at the time she was enrolled, there were two rooms inside - one for Kindergarten through Second Grade, and the other for Third through Eighth Grade. She fondly remembered the school and commented about the beautiful trees that surrounded the property.

School bells rang for the very first time at Ojibwa Elementary School in 1961. The enrollment was one hundred seventy children in grades kindergarten through fourth grade with a teaching staff of five teachers. Mr. Raymond Fraser served a dual role as principal of Clinton Valley School as well as Ojibwa. 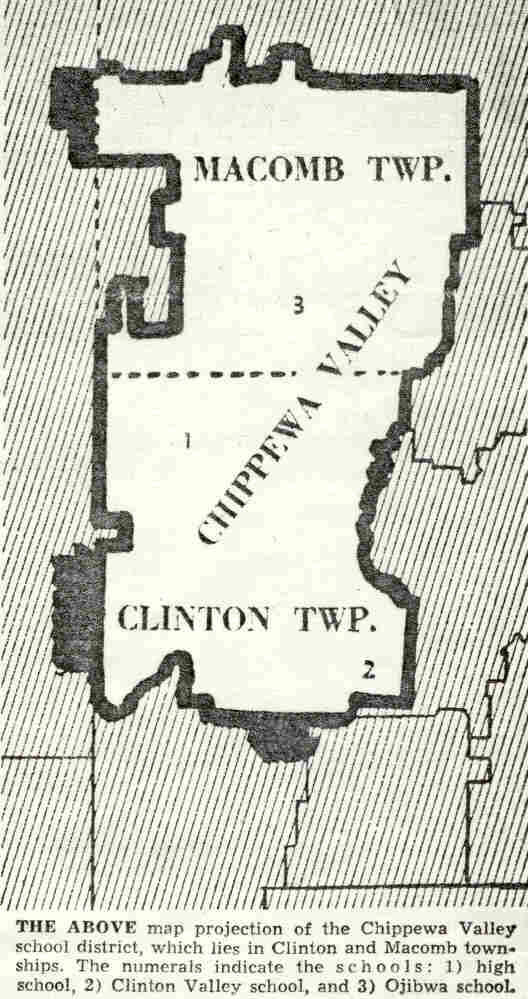 The Chippewa Valley School District began in the fall of 1959. It was created through a consolidation of small existing school districts in Macomb County such as Clinton Valley, Fox, Dittrich, Garfield, Cass, and Berger. The map at the right is taken from an article in "The Daily Monitor" in 1962. At that time, there were only three schools in the district - Clinton Valley, Chippewa Valley High School, and Ojibwa Elementary.

Today Chippewa Valley is one of the fastest growing school districts in the state. It has grown to twelve elementary buildings, four middle school, and two high schools. The population of Ojibwa has grown by leaps and bounds over the years. Ojibwa has played a role in the opening of several other schools when Ojibwa's enrollment began to burst at the seams on more than one occasion. Due to an extreme overflow of students in 1979, it was even necessary to rent space at St. Isadore's School to house our first and second graders. Students from Ojibwa fed the populations of Fox, Mohawk, Cherokee, Erie, Cheyenne, and one of our newest elementary schools, Shawnee Elementary. Ojibwa School today has approximately 740 students in attendance.