Our workshops are activities that recognize and support the unique cultural and educational needs of Indian children and incorporate qualified tribal elders and seniors.

Since occasionally we acquire the kits for the workshops from out of state vendors, we would appreciate it if you call in advance to register your children.

To register for the Feather Fan: Please call no later than March 3

To register for the Moccasins: Please call no later than April 10 and we will need the children's shoe size.

Warbonnets (or war bonnets) are the impressive feather headdresses commonly seen in Western movies and TV shows. Although warbonnets are the best-known type of Indian headdress today, they were actually only worn by a dozen or so Indian tribes in the Great Plains region, such as the Sioux, Crow, Blackfeet, Cheyenne, and Plains Cree. 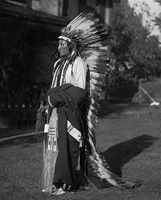 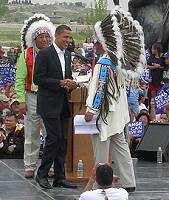 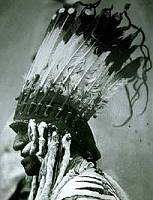 In the first photograph, you can see a Dakota Sioux warrior wearing a trailer warbonnet (native headdress with single or double rows of eagle feathers descending in a long 'tail' all the way to the ground).

In the second photo, modern Crow elders attend a formal event in halo warbonnets (native headdresses with eagle feathers fanned out around the face in an oval shape).

All three types of Indian war bonnets were made from the tail feathers of the golden eagle, and each feather had to be earned by an act of bravery. Sometimes a feather might be painted with red dye to commemorate a particular deed. Besides the feathers, Plains Indian warbonnets were often decorated with ermine skins and fancy beadwork.

The Indian headband is also well-known from movies and other popular images of Native Americans. However, this style of headband was typically only used by a few tribes of the northeast Woodlands. Usually the headband consisted of a finger-woven or beaded deerskin strip with tribal designs on it. This band was then tied around the brow with a feather or two tucked through the back. Not only eagle feathers but turkey, hawk, egret, and crane feathers were also used for Woodland Indian headbands.

Unlike many of the Native American headdresses on this page, both men and women wore headbands, which were not associated with war. The number and type of feather did not usually have special symbolic meaning, though in a few tribes that bordered the Plains eagle feathers were reserved for warriors. For the most part, Woodland Indian head bands were worn for their beauty, and were often decorated with intricate patterns, wampum, beads, and quillwork.
Information from: http://www.native-languages.org/headdresses.htm